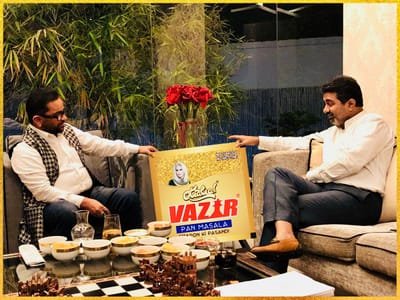 The Chief Evangelist of Olialia PanMasala Mr.Abhishek Verma and his wife Chairperson of Olialia World Mrs.Anca Verma, alongwith their core-team and management visited the industrial plant of Olialia Pan Masala in Faridabad city, NCR of Delhi on the 10th of March 2018. According to Olialia spokesperson, Abhishek Verma and Ibrahim Mohammed Didi will also be administering a joint cooperation in the infrastructural development of Maldives, which includes the recently announced Olialia New Maldives concept. The company said that its proposal would be evaluated and assessed by the Maldives government and they would decide whether further competitive bids are to be invited or straightaway award the contract to construct and operate the airport for 50 years... The 2017 Olialia calendar presented by Danj Entertainment Inc was launched with much fanfare at the Privee lounge, Hotel Shangri la in Delhi. The company Current Sponge, who belongs to Sam Branson, son of the famous billionaire Richard Branson, owner of Virgin, has decided to shoot a film on the business empire of the Lithuanian Blondes Olialia. The documentary film on how the business of Olialia girls developed and began thriving in Lithuania will be a prelude to a major TV show. Study revealed that 81.8% of Lithuanian respondents were aware of Olialia, Lithuanian trademark covering 75 business areas. The study carried out by market research company TNS Gallup revealed, that the awareness of Olialia trademark increased by 15% in 2009, as compared to 2008.